A Bright Start: The First Air Jordan 1 of 2021 is Wilder Than Ever

A Bright Start: The First Air Jordan 1 of 2021 is Wilder Than Ever

After releasing dozens of kooky Air Jordan 1s over the last few years, Jordan Brand’s opening salvo of 2021 is of the lovingly unkempt variety. The new Air Jordan 1 High “Volt Gold,” releasing in family sizing Saturday, January 9th, and available now at Stadium Goods, is exactly the kind of anything-goes vibe we all expected “JB” to drop following a year that saw Nike enlist Ben & Jerry’s and the Grateful Dead as collaborators. What strange times we’re livin’ in, man.

Like the Nike Dunk and Air Force 1, the Air Jordan 1 has long attracted attention from creatives outside of the sneaker bubble because of its blank canvas-like qualities and cultural cache. In the last few years, music artists J Balvin and Travis Scott, jewelry designers like Melody Ehsani, and many others have added their signature flair to the Jordan 1. Each as unique and popular as the next. In turn, Jordan Brand has seized the opportunity to give non-collaborative Jordan 1s the same kind of personalized feeling.

If you closed your eyes and tried to picture a Jordan 1 with white, black, Volt, and University Gold panels, you might think of a shoe created on Nike By You by someone with too much time on their hands, but as you can see, the discordant array of colors actually works. And there’s more to the “Volt Gold,” too. The look is balanced out by a set of vintage-inspired cream shoelaces that jives with the way people are rockin’ shoelaces these days, and it even features a reversed, orange-tinted translucent tongue tag with “Nike Air” branding on it. Can anyone say, Off-White?

Speaking of Virgil Abloh’s high fashion brand, there are other references to his past work with Jordan, specifically the Jordan 1, on the “Volt Gold.” The design displays what could be best described as “overcut” leather panels, notably on the black leather at the toe and the University Gold panel on the heel. Underfoot, a cream colored sole, like the one that appeared on “The 10,” finishes off the look. 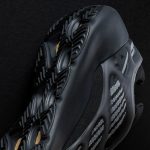