Adidas’s plan of action for its extremely popular Yeezy line has always been to give the people what they want. Dozens upon dozens of wearable colorways of the Yeezy Boost 350 V2, a modification or two to an existing model like the Yeezy Boost 700, and everyone is satisfied. It was business as usual in 2020. With a caveat.

If last year was about releasing new Yeezys in rapid succession to meet demand, then this year adidas wasn’t so much concerned with sustaining a breakneck pace as much as it was with introducing problem-solving concepts to Kanye West’s signature shoe collection. The pandemic has caused many to relocate their workspace from the office to home, so adidas responded by releasing its Yeezy Slide, a casual number that ticks all the boxes of what people are wearing at the moment. Then there’s the Yeezy QNTM, the line’s first true crossover performance-meets-lifestyle model. It can be worn to get shots up in the park to break the boredom of staying indoors for too long as easily as it can with a casual weekend ‘fit.

Even with a steady flow of new Yeezy Boost 350 V2 colorways again this year, versatility and variety were the themes in 2020 for the adidas Yeezy line overall. From “Cinders” to Slides, here are our picks for the top ten Yeezy drops of the year.

Without a doubt, the Yeezy Boost 350 V2 has been the line’s most popular model since its original release in 2016. Best known for its stylish and wearable colorways, the 350 V2 added another goes-with-anything look in July when the “Zyon” was released. Like many of its contemporaries, the “Zyon” removes the traditional heel tab found on earlier versions in favor of a more streamlined appearance.

Adidas kept the winning formula of every great Yeezy Boost 350 V2 intact on the “Carbon” colorway. The shoe’s mostly black and grey Primeknit upper and Boost-cushioned semi-translucent yellow midsole are neither overly flashy or groundbreaking at this point, but when a shoe is this popular, why mess with a good thing?

Is it a coincidence that some of the best Yeezy Boost 350 V2s remove the heel tab in favor of a sleeker look? Probably. But it’s interesting nonetheless. The “Israfil,” like the “Zyon” and “Carbon” we also tabbed as some of the year’s most notable releases, also features an earthy palette of colors and heel-tab-less design. ‘Ye is nothing if not consistent.

Not as definitively black as the aptly named Yeezy Boost 350 V2 “Black” colorway, the “Cinder” nonetheless channels its predecessor’s shadowy aesthetic in an equally versatile colorway. The ashy Primeknit upper, laces, and ribbed midsole all hide dirt, smudges, and any other foreign contaminants extremely well, making it a prime candidate for one’s everyday sneaker rotation.

Despite riffing on classic performance hoops and running styles from adidas’s archive for his Yeezy line, Kanye had produced an official performance based Yeezy prior to the Yeezy QNTM model that debuted earlier this year. You would think that after leveraging inspiration from Kobe Bryant’s old signature adidas hoops line that some of those late ‘90s and early 2000s design elements would underpin the QNTM, but they don’t. Instead, the progressive high-top cuts a futuristic vibe with a padded ankle collar, reflective Primeknit upper, and Boost midsole.

There was a bit of confusion ahead of the release of the adidas Yeezy Boost 380, and that seems to be the case for a lot of new Yeezys coming down the pipeline of late. The mid-top Yeezy 380 was originally deemed the Yeezy Boost 350 V3, but that was changed by adidas prior to its release. As for its design, the new silhouette features an extraterrestrial vibe thanks to its multicolor Primeknit upper that resembles the surface of a planet in outer space. The “Mist” colorway best exemplifies the look we’re describing due to its tan digi camo-like Primeknit pattern.

Mr. West isn’t a big advocate for logos these days. His Yeezy clothing line is almost entirely void of graphics or branding. And his adidas Yeezys hardly even feature adidas’s famous Three Stripes branding. So when the Yeezy Boost 700 MNVN debuted with giant reflective “700” detailing across the mid-panel, everyone was a bit surprised. The 700 MNVN removes the sewn-on overlays of the original design, too.

The Yeezy 700 V3 helped usher in a new era for ‘Ye’s much talked about “dad shoe” when it became the first 700 model to opt for EVA foam cushioning in the midsole instead of the standard Boost cushioning found on earlier releases. Still as comfortable and even more streamlined now with a lowered height, the new Yeezy 700 V3 has only had three releases in total, two in 2020. The “Alvah” is the one that gets the nod on our Best Yeezys of 2020 list.

One of the biggest footwear trends of 2020 was the rise in popularity of clogs, sandals, and slip-ons. Unsurprisingly, the new relaxed casual look peaked when everyone is spending more time indoors than ever before, but we’re fairly certain that the wave would have reached a crescendo at some point this year anyway. The Yeezy Slide, especially in the “Bone” colorway, exemplifies the look everyone has been aiming for since Birkenstock Bostons began popping up in lookbooks and social media: easy, breezy, and versatile.

Futuristic in every sense of the word, adidas reportedly produced the original sample of the Yeezy Foam RNNR in under a day in Atlanta. If that doesn’t speak to the design’s uniqueness, then its ultra lightweight foam—created in part with harvested algae of all things—and perforated construction will. Simply put, there’s nothing as polarizing on the market as it stands today. 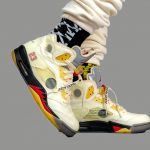 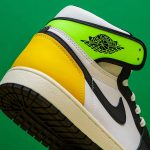 A Bright Start: The First Air Jordan 1 of 2021 is Wilder Than EverNews